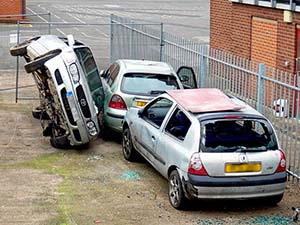 You have probably seen the terms uninsured and underinsured on your car insurance policy, but what do they mean and how does it affect you?

What is Uninsured Motorist Coverage?

Uninsured motorist means that you are covered if the driver of the other vehicle causes an accident that damages your car or truck, and they have no insurance. This is designed to provide coverage for those with liability only as part of their insurance policy.

As of 2013, 21 states and the District of Columbia require uninsured motorist coverage, although it is usually part of the minimum insurance that many companies provide.

Although the number of people without insurance is significant, it does not represent most drivers on the road today. This means that your chance of being involved in an accident caused by a driver without insurance is relatively small, so the fees associated with the coverage are low.

In 2012, the total number of uninsured motorists was estimated at 12.6% across the US.

What is Underinsured Motorist Coverage?

This is when a motorist does not have enough liability coverage to pay for all the repairs caused to another vehicle. Unlike uninsured drivers where no coverage exists, underinsured is dependent on the value of the car that was damaged in the accident.

So, there are no hard and fast numbers for those who are considered underinsured because the minimum liability levels required are enough to cover some types of damage, but not others.

All states that require drivers to have insurance coverage have uninsured motorist as part of the policy. This means that state minimum coverage includes uninsured motorist and liability so that drivers are covered when an accident they did not cause damages their vehicles.

However, not all states that require insurance have underinsured motorist as part of the coverage. This is because the term underinsured is relative to the vehicle that was damaged. So, a driver with $10,000 in liability insurance may easily cover an old vehicle with a low value while hitting an expensive, performance car may be well out of coverage range.

Because underinsured depends on the value of the vehicle and the amount of medical expenses incurred, it means that some drivers might be fine with a low liability amount while others would still be tens of thousands of dollars short if they caused damage to an expensive car or truck.

Should You Get Uninsured Motorist Coverage?

The answer is yes, even if you live in a state that does not require it. Not having uninsured motorist coverage means even though the chances of being struck by a vehicle driven by an uninsured motorist are small, you may be on the hook for thousands of dollars in repair or replacement costs even when the other driver caused the accident.

Underinsured is less clear because of the amounts involved are relative to the vehicle. However, it is recommended that $50,000 worth of liability coverage is enough for most cars and trucks, although not all of them. There is no guarantee that you will have enough liability insurance to cover all vehicles, but for many $50,000 will cover the clear majority.